“The abandoned infant’s cry is rage, not fear.”

Today’s story is by Pam Houghton.

For many years, I was a little sad and wistful whenever Father’s Day rolled around because inevitably, there was some article in the newspaper that celebrated a bunch of dads doing ordinary things for their families every day. 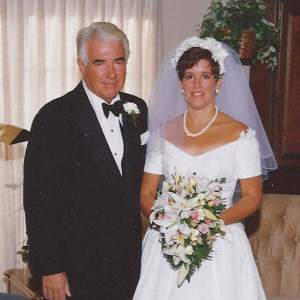 My dad was sort of ordinary, at least for a while. He built ice rinks in the backyard and burned piles of leaves in the street (back when it was legal) with a fearlessness usually reserved for Tom Cruise action movies. For a few years, that same bravado turned him into a star salesman, one who traveled and sold the type of stuff surgeons used in the operating room.

After my parents divorced when I was 12, he turned into the kind of dad who’d drop in now and then, with a showman’s flourish, then leave for months, or later, years without ever contacting us.

As much as that sounds like some awfully depressing Lifetime Movie of the Week, there were some good things to come out of it, proving that…

…there are many opportunities in this here lifetime to take a bowl of stinky old lemons and turn them into sweet-tastin’ lemonade.

Because my dad wasn’t around, I think I grew up more self-reliant than some of my peers. Especially if self-reliance meant knowing how to fold fitted sheets or walking along the shoulder of a busy road to my table-bussing-turned-hostessing-turned-waitressing job (you gotta love upward mobility) to pay for college.

I also acquired a knack for delivering a sarcastic quip; that happens when you spend a lot of time deflecting your own self-pity. Later, I used my experience to combat working mom guilt: It might be hard to drop two kids off at daycare before I go to work, but nothin’s as hard as growin’ up without a dad. Thanks, Dad, for toughening me up.

So, imagine my surprise when I worked in a male dominated environment for many years after I graduated from college, surrounded by dads, yes, dads, who stuck with their families, talked about their kids, even had photos of them on their desks. Wow.

Mentally, I cataloged ways in which these and other dads did ordinary things for their children coaching a daughter’s soccer team, helping a son understand algebra, defending a kid at parent/teacher conferences, saving for college if it were feasible, loaning an adult child money for a starter home. I knew I had missed out on a lot, but it wasn’t until I had all this concrete evidence before me that I realized how much.

Because of that, I made sure the family I married into had a strong tradition of sticking together — where dads didn’t bail. Dads who reap the rewards of being there for their kids and helping them grow into happy adults. If they are lucky, they watch as children graduate from high school or college, start new careers, meet someone to spend their lives with, and maybe, have children of their own.

Did my dad see all he missed out on? I don’t know. But even if he didn’t,

I know that not having him in my life wasn’t just my loss, it was his as well.

Pam Houghton is a freelance writer whose work has appeared in the Christian Science Monitor, MetroParent, MetroYou, Western New York Family, Strut Magazine, Patch, Examiner, Windsor Parent, Observer-Eccentric Newspapers, Detroit Free Press (for which she received a coffee mug) and the Detroit News (for which she received a hard copy book on the art of French cooking).