“Experience is a hard teacher because she gives the test first, the lesson afterward.”

Today’s story is from Josh Linkner. 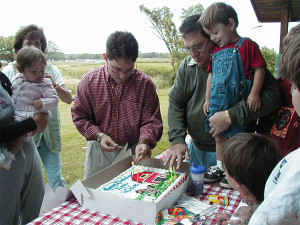 Three generations: Josh (red shirt), his dad, and his son Noah (who will be 16 next month).

Robert Linkner was one strange dude. He forged his own path as he journeyed from hippie to psychologist to retailer to financial planner. He had a hilarious, dark sense of humor, was an incredible chef and had a series of oddball hobbies. He took pride that his tastes in music, travel, food, and life were always a bit different than the average Joe. His life ended far too early when we lost him to cancer in 2007.

It’s natural to miss your dad on Father’s Day, but this year I began to reflect on the lessons he taught me. Sometimes mysterious in his ways, I now realize he was quite deliberate as he instilled his philosophies in my sister, brother, and me. His wisdom has shaped who I am today, and there’s much to learn from his irreverent, non-traditional approach.

Here are six life lessons from my eccentric and non-conformist father:

1. Why not you? In any situation in life, he taught me, someone has to be the best. In the classroom, on the sport field, in the boardroom. He professed that results are not set by fate, but rather by choice. He made sure I knew that choice was mine. “It might as well be you,” he insisted.

2. Traditions exist to be broken. He proudly served strange Mexican dishes on Thanksgiving, and was famous for doing the opposite of what was expected at every opportunity he had. While it got him in trouble at times, it paved the way for me to live comfortably outside my comfort zone.

3. Explore the oddities. He could name every mushroom in the woods, was an expert sailor, and enjoyed watching the bizarre sport of Flugtag. His quirky habits set the stage for seeing the world from uncommon vantage points.

4. Always feed your mind. An avid reader, he pushed hard on the value of constant learning and growth. To out-think, you must out-know.

5. Meet your commitments. He was a no-excuse guy, and taught me that delivering on commitments — big and small — was non-negotiable. Think how different the world would be if everyone embraced this approach.

6. Independence is paramount. He wasn’t the most nurturing guy, but I now see that fostering independence was his highest value. He taught me self-reliance, grit, and persistence at an early age. I learned that if I wanted something, I had to work to make it happen.

I share these ideals, both as a tribute to my dad but also as gift from him to you. Embracing these philosophies can serve as an accelerant in the pursuit of your own goals and dreams.

So here’s to my father, Robert Linkner. I hope his powerful lessons will move you in the same way they shaped me. Timeliness wisdom from a peculiar, but caring man.

Josh Linkner is Founder and former CEO of ePrize, the world’s largest interactive promotion agency. It provides digital marketing services for 74 of the top 100 brands. As CEO and Managing Partner of Detroit Venture Partners, Josh remains at the cutting edge of technology and entrepreneurship. The firm is especially focused on revitalizing his hometown of Detroit. Josh is a regular contributor to Forbes and Inc. magazines and his work has been featured in The Wall Street Journal, USA Today, and The New York Times. You can learn more about Josh at http://joshlinkner.com/meet-josh/.