“Fear makes strangers of people who would be friends.”

This story is contributed by Lori Holden.

My name is Lori. Today, I’ll share what may be the greatest life lesson in the history of humankind — spoken through the words of my Dad.

Want to have a richer life? Dad told us the secret early on…

I grew up with two sisters. Sometimes we came home whining, “The other kids won’t play with me!” or “They’re leaving me out!” or “Nobody likes me!” 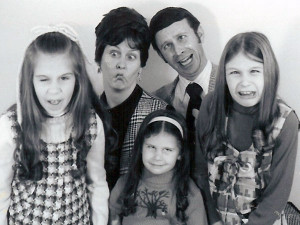 Lori and her dad (both right) and family

He said it repeatedly, ad nauseum. Dad was big on aphorisms, but that’s another story.

He suspected that more often than not, we were actually excluding ourselves by making assumptions about others. He constantly reminded us that the other kids were scared of making new friends too, so we could choose to be the ones to approach them and join in on activities. Dad was determined to raise three confident and assertive young women.

As a kid, I couldn’t comprehend the magnitude of impact this one phrase would have on the rest of my life. When I was the newbie at work gatherings, and surely everyone else already had friends, Dad’s voice would whisper…

And I would. Hand out, I’d introduce myself and smile. At cocktail parties, when I’d rather hug the wall than interrupt a formed group, Dad’s voice echoed…

And I did. I made friends. I was included.

Ever seen the movie Field of Dreams — the voice quietly urging Kevin Costner, “If you build it, they will come”? This was my dad’s gift to us.

And true enough, my “field of dreams” was always within grasp, provided I listen to Dad’s voice…

I can’t remember it not working. I do remember it being hard each and every time — but always worth it. It applies to a much greater concept though, circling back to the “greatest life lesson” reference.

When you force yourself to draw a wider circle, as uncomfortable as it may be, you automatically enrich your own life with the only thing in life that really matters…other people.

My dad grew up without a father. Maybe it forced him to “draw a wider circle” early on in life.

But for not having a dad growing up, he certainly didn’t let that stop him from being the most incredible father any three little girls could ask for.

XOXO Dad. Thanks for loving us so well.

Lori writes regularly at LavenderLuz.com and is on Twitter as @LavLuz. Her book, ‘The Open-Hearted Way to Open Adoption: Helping Your Child Grow Up Whole’, written with her daughter’s birth mom, is available through your favorite online bookseller. She lives in Denver with her husband Roger, and tweens Tessa and Reed. These days she draws wider circles through her yoga practice.