Today’s story is from Pat McMahon.

I’m sure you know the story of “Beauty and the Beast.” But what you probably don’t know is… I’m their son.

No, I don’t mean the couple in the children’s story. But, it would have been perfectly appropriate to call my parents Beauty and the Beast because that’s the way they talked about themselves. 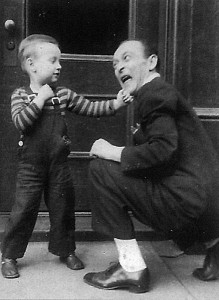 Pat teaching his dad Jack a thing or two, age 5.

You see, before my father and mother met and went into the entertainment business, my dad was a prizefighter — a professional boxer with over 90 fights. Back in those days, they didn’t check personal information very carefully, so he was able to get into the fight game when he was 14 years old.

He had a pretty impressive record too, but it was at the expense of his face — layers of scar tissue that built up on his brow, a nose broken so many times it spread in multiple directions. How he ever heard anything through the tiny pinholes of his “Cauliflower” ears is a wonder.

And then there was my mom, The Beauty. She was the essence of the song “Tiny Dancer.” Mom was a petite ballerina, a tap dancer, a skilled acrobat.

She attracted everyone, but she loved The Beast. And did he ever love her!

They never minded showing it either, mostly by just being real. They were always openly honest with one another about their feelings. 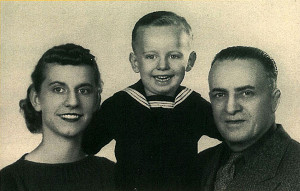 Pat McMahon with his mom Adelaide and his father Jack

For my father, that meant a surprising level of tenderness and sensitivity, about so many things, which has allowed me to keep and cherish this portrait of him.

Here was a man whose appearance translated, to many, as a rough-hewn, tough as nails street guy… Someone to be wary of, perhaps to avoid… Someone, for whom sentimentality was probably a weakness.

But my real life memory is, and always will be, of a role model. Orphaned at 10, who regularly wept in appreciation of all things beautiful, from ballet, to animal stories, to my mother. My mother, the Beauty, who loved nothing more than softly kissing that broken nose on the magnificent face of The Beast.

So what can we learn from Pat’s dad?

“Beauty is not in the face; beauty is a light in the heart.”
—Kahlil Gibran

Pat McMahon is a legend in Arizona broadcasting. His day includes an hour live on AZTV7/Cable 13 each morning and Director of Public Affairs for News 92.3 KTAR; commentaries during “Arizona’s Morning News”; the weekly “McMahon Group” and “The God Show.” 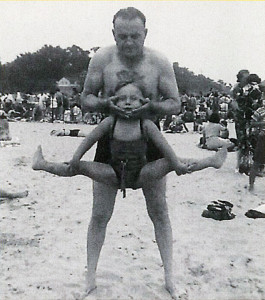 3 yr. old Pat and his dad Jack
on a South American Beach

Pat McMahon is star on radio & TV — and with all who know this wonderful man. He is a world class person and long-time friend. Pat, thank you for sharing this heartwarming story.
—Greg Hague